When I initially worked with Virtual Server, I used default configuration. That caused me some trouble, as I started creating new virtual machines, my system drive started loosing space. I had to move all those virtual machines and their virtual disks manually to another location to release some space. Then I had to add those machines again, after doing what I should had done earlier.

Search paths: These are additional paths, where you can look for existing virtual machines, virtual hard disks, undo disks, any ISO image files (.iso) that you can use later on.

Why you need to set these paths, because Virtual Server is a web application, it can provide any interface to browse your resources on host system. If it could it may jeopardize your security settings and other issues. That’s why it only lists files in those search paths, which you can then use for different configuration and installation.

To set these paths, open up your browser and go to following address, replace [machine] with either "localhost" or your machine name. Now click on "Server Properties" under "Virtual Server" box, and from this page click on "Search paths" link. 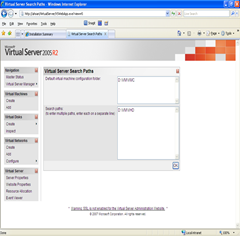 Set these paths as required, and click on OK. Now when you create new virtual machines, they will placed at the desired location. These paths must either follow Universal Naming Convention (UNC) names in the form \\computer name\share\folder, or they must be local file paths like D:\VirtualMachines. Remember that local file paths would refer to the host system, where virtual server web application is hosted.

This site uses Akismet to reduce spam. Learn how your comment data is processed.